I will not longer be using this space for my blog. For news and other bloggy things, come visit me at http://acebauer.com/blog/

I will be at Boskone 53, Friday-Sunday February 19-21, 2016 at the Westin Boston Waterfront Hotel in Boston, Massachusetts. Boskone is New England's longest running science fiction and fantasy convention: a fun weekend filled with books, film, art, music, gaming, and more. I will be appearing at a bunch of events--my schedule is below.

Hope to see you there!

I'll be at the 2015 NESCBWI conference in Springfield, Massachusetts this weekend, April 24-26. Besides attending a whole bunch of workshops, I'll be presenting one on Meta Books with Deborah Freedman, author/illustrator extraordinaire!

If you're there, be sure to say hello!

I'm excited to announce that I will appearing be at this year’s Boskone, Friday, Feb. 13 through Sunday, Feb. 15, at the Westin Waterfront Hotel in Boston, Massachusetts. Boskone is New England's longest running science fiction and fantasy convention. This will be my first time there.

I will be doing a reading, signing books, and participating in five panels. I'll get to meet fans -- so many wonderful fans! -- and some incredible talent in the world of children’s books, science fiction, and fantasy. I’m really looking forward to it.

I'm scheduled to appear as follows (although there is a chance of last minute changes):

Friday 7:00 pm - 7:50 pm
It's Complicated: Kids and the Culture They Consume
A panel with Veronica Koven-Matasy, Bruce Coville, Lauren Roy, and Stacey Friedberg

Sunday 1:00 pm - 1:50 pm
YA Then and Now
A panel with Ken Altabef, Bruce Coville, Stacey Friedberg, and Veronica Koven-Matasy

Though this is about picture books, this holds true for all writing: It's Okay to Write Terrible Stories. (If you write, or wish to: go, read.)

This Wednesday, November 12, from 6 to 7:30pm at the Hartford Public Library, 500 Main Street, Hartford, I will be giving a writers' workshop along w/ writer and educator Doe Boyle and Donita Aruny from the Shoreline Arts Alliance. We will discuss writing for children as well as submitting to this year's Tassy Walden Awards: New Voices in Children's Literature.

The workshop is free and open to the public, although the Shoreline Arts Alliance does ask folks to preregister to ensure that there are enough handouts.

A few weeks ago I ordered one and left my name for pick up. When my husband and I arrived, it had just come out of the oven smelling delicious. The owner looked at the ticket.

It comes from The Honeymooners, of course, the 1950s sitcom starring Jackie Gleason. Alice was his wife, leveled headed but sharp-tongued, who invariably warned him that his latest scheme wouldn’t work. “BANG, ZOOM! Straight to the moon!” he’d tell her, brandishing his fist.

Each time, the audience roared. And each time, I cringed.

Why was threatened violence funny?

Was that the joke? That Gleason was inept, after all?

Yet it’s the line “To the moon” that makes people laugh.

Witness the small crowd who did, at the pizzeria—mostly men in their late 50s, the owner’s pals, in on his humor. They all broke up when he threw out the line.

I felt very uncomfortable. But a lifetime of practiced politeness kicked in, and I smiled.

“You know the joke?” the owner asked.

“Always loved it,” he said.

I paid for the pie and, as we exited, I told my husband, “That was really offensive.”

Today was a busy day. My husband was under a deadline, and I was working on several chapters for a new novel.

“Take out?” I suggested for dinner.

“How about pizza,” he said. “Italian combo.”

He looked at the pile of work on his desk, hesitating. I understood. He didn’t really have the time. On the other hand, I did.

“I don’t want to be told that I’m going to be punched to the moon.”

“Get their baked beans, too. And a baked potato.”

I'll be at the 2014 New England Society of Children's Book Writers and Illustrators regional conference in Springfield, MA this Friday May 2 through Sunday May 4.

In addition to a host of panels I plan on attending, I should be at Friday evening's Meet and Greet, the Volunteer Pizza Party on Saturday, and the Self-Portrait Party for Illustrators Saturday evening (no, I'm not an illustrator, but this sounded too fun to miss).

If you happen to run into me, be sure to say hello! 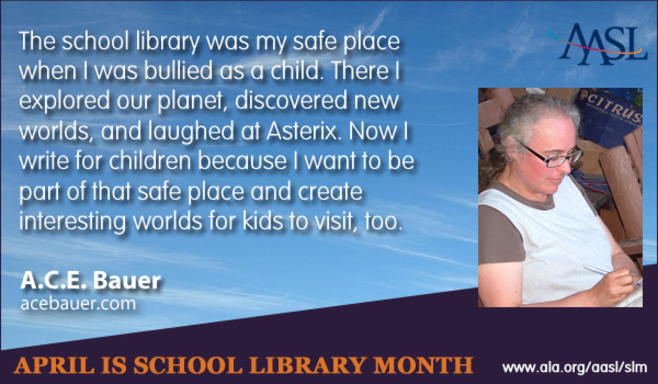 April is School Library Month, when, every year, the American Association of School Librarians' (AASL) celebrates school librarians and their programs. This year's theme is Lives change @ your library®, and as part of this celebration, I was honored to be asked to contribute to their Gallery of Authors.

Thank you to all the school librarians who do so much for kids everywhere. And thank you to the AASL for asking me to participate.
Collapse