I will be attending this year's American Library Association Midwinter Meeting being held at the Pennsylvania Convention Center in Philadelphia over the long weekend of January 24 through 28.

If you happen to be around, please drop by and say hello!

Thanks to Angry Girl Comics for the heads up.

The Alpha Science Fiction, Fantasy and Horror Workshop for Young Writers (ages 14 – 19) will be held at the University of Pittsburgh’s Greensburg Campus on July 25 – August 3, 2014. Students from all over the world will get to spend ten days working with professional authors, Tobias S. Buckell, Bruce Coville, Tamora Pierce, and Rachel Swirsky.

Learn about writing and publishing. Meet other teens who share your interest in writing speculative fiction. Talk about short stories, novels, and films. Have your submission story critiqued. Brainstorm new story ideas, write a first draft, receive feedback, and rewrite. Attend readings by the authors. Do a public reading. Learn about submitting for publication, and send off your story at our manuscript mailing party.
. . .
2014 will be Alpha’s thirteenth year. Previous attendees have placed in the Dell Magazines Award and Writers of the Future contests, and have sold stories to Clarkesworld, Strange Horizons, Fantasy Magazine, Daily Science Fiction, Cicada, Beneath Ceaseless Skies, Lady Churchill’s Rosebud Wristlet, Nature Futures, Pseudopod and more.

The tuition is $1100 and includes all workshop-related costs, but does not include transportation to and from Pittsburgh. Limited scholarships are available for students in need of financial aid.

To get more information and to apply, go to their website: http://alpha.spellcaster.org/ (Deadline is March 2, 2014.)

When my kids were small, they were big Arthur fans--one of their must-see shows on PBS. As they grew, they discovered Neil Gaiman's work in picture books, children books, comic books, and eventually adult novels--and became big Gaiman fans. It tickled me to learn that Neil Gaiman was recently featured in an Arthur episode, which discusses writing graphic novels and falafel philosophy. Yes, it does work.

(The link currently has the video imbedded in it--I'm not sure how long that will remain.)

The copy: "After a day on the slopes, she's ready for that first steaming sip of Irish coffee. What she's not prepared for are the other gals, bundled in bulky fleece, wishing they looked like her." [Insert glowing product description.]

Because you know, every woman's wish is to be both prettier than and disliked by other women. And being pretty means being disliked, right?*

The catalog's safely in the recycling bin.

Thank you to Mary Robinette Kowal and Yes, You're A Racist who led me to the video.

I'll be attending this year's American Association of School Librarians conference in Hartford, Connecticut, which takes place this weekend, November 14-17.

You can catch me Friday evening at 9 p.m. at the Author & Librarian Tweet Up, an informal get-together at the Marriott Hotel Crush Bar/Starbucks. On Saturday at 10:15 a.m., I'll be a panelist for Head in the Clouds, Feet on the Ground: The Role of Fantasy in the Real World with other fabulous middle grade and YA authors. After the panel, I'll be signing books at AASL's Authors Alley from 11:30 a.m. until 12:15 p.m.

If you're around, stop by and say hello!

This Saturday October 19 I'll be attending the New Media Day conference at the Eric Carle Museum of Picture Book Art, hosted by New England SCBWI. If you happen to be around, come say hello.

This weekend I listened to a fascinating piece on NPR about women in cinema. Essentially, although women are half the movie-goers in the U.S., they have only 17% of the onscreen roles—including crowd scenes. Off screen isn’t much better: women represent 7 percent of directors, 13 percent of writers, and 20 percent of producers.

Geena Davis, known for her role as Thelma in “Thelma and Louise” and founder of the Geena Davis Institute on Gender in Media, commissioned a dozen studies on women in media from the Annenberg School at University of Southern California. Perhaps the most disturbing result to me was from a study where they looked at the ratio of men and women in groups.

Which perhaps explains another disturbing finding, that this ratio is similar to the ones found in many professions where women are traditionally underrepresented—like cardiac surgeons (somewhere in the single digits) and tenured professors (around 20 to 25%), and many, many more. Davis asks, “is it possible that 17 percent women has become so comfortable and so normal that that's just sort of unconsciously expected?”

This misrepresentation of women onscreen exists not only in cinema but in TV as well, and, particularly disturbing, also exists in children’s programming. Davis notes:

What we're in effect doing is training children to see that women and girls are less important than men and boys. We're training them to perceive that women take up only 17 percent of the space in the world. And if you add on top of that that so many female characters are sexualized, even in things that are aimed at little kids, that's having an enormous impact as well.

The piece explores some of the economic reasons that this may be happening, particularly the sea change studios have seen in profits from abroad where there is a preference for movies with lots of explosions and little dialogue. As a result it has been harder and harder to fund movies with women in lead roles. Which begs the question, why should women be underrepresented in non-speaking roles? And why would the foreign movie market matter in children’s television programming?

The entire report is interesting and can be heard here. For those who prefer to read a transcript, it can be found here. 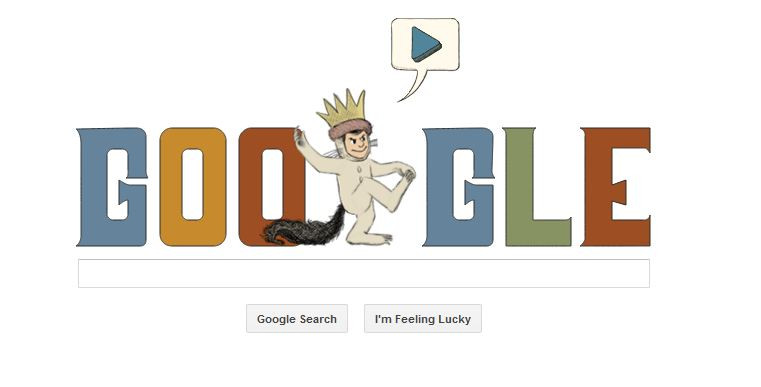 For Maurice Sendak fans, check out Google's front page today.  It's a wonderful tribute for the 85th anniversary of his birth.

ETA: Here's the permalink for the Google Doodle.
Collapse